Malaysia's handicrafts and arts are as vibrant and diverse as their multicultural history. Malaysian craftsmen use various tools to express themselves from cloths to kites. Below are some of the traditional arts, and handicrafts that are well known in Malaysia. Infusing Malaysia’s heritage and cultural history into their artwork, these craftsmen and the craftwork are worth every praise they receive.

While some of these crafts are powerful against time-testing, others face difficulties as their craftsmen strive to keep the cultural heritage alive! The multi-cultural essence of this country is reflected in the handicrafts made by local craftsmen. Batik, Songket, Kite Making, Woodcarving, Menkuang, Kris, Boat Making, and Rattan Weaving are some of the significant art and craft in Malaysia. Go through our whole article to know about the handicrafts and arts of Malaysia-

Handicrafts and Arts in Malaysia 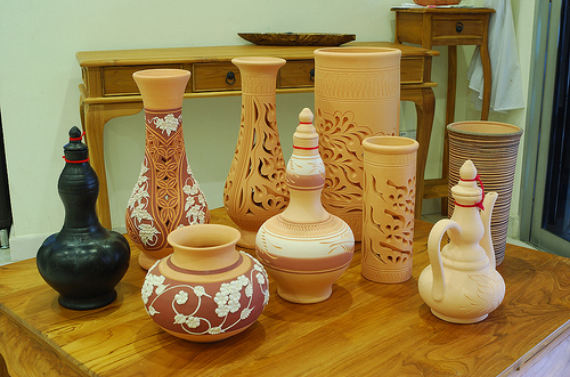 Popular traditional craft pieces include Perak's labu sayong, geluk, belanga, Chinese dragon kiln ceramics, and Sarawakian pottery tribal motif. Contemporary pieces include vases, flower pots, decorative pottery, sculptures, and kitchenware. Labu Sayong is a black-colored gourd-shaped clay jar commonly used to store and cool water. Perak state is identified for this kind of pottery. The belanga, which is found in many rural Malaysian homes, is often characterized by a round base and a broad rim. It is mostly used for cooking curries, as its round base is supposed to allow a more even heat distribution. This angular-shaped jar is widely used in the Pahang and Terengganu states for storing water. 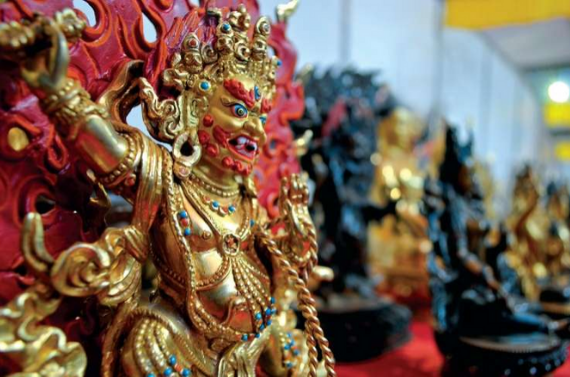 Traditional brass casting and bronze working are still being used as popular since the early days to make an array of utensils. More recently in the 19th-century pewter became increasingly common with the discovery of tin in Malaysia. Metalcraft goods include modern decorative pieces, kitchen utensils, and traditional items such as tepak sireh sets, rose-water instruments, and keris blades. 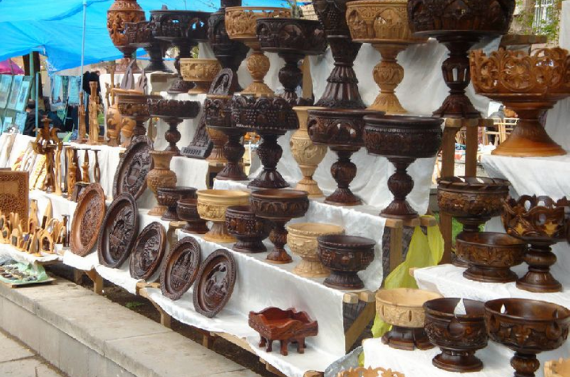 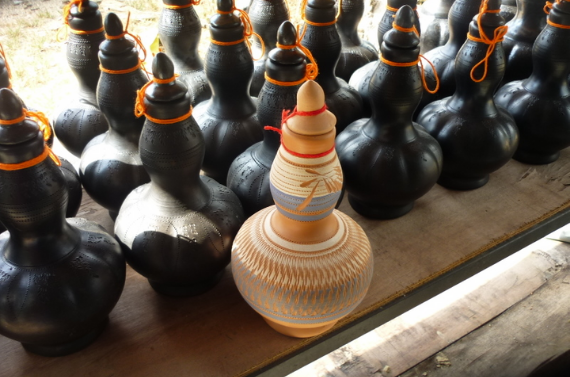 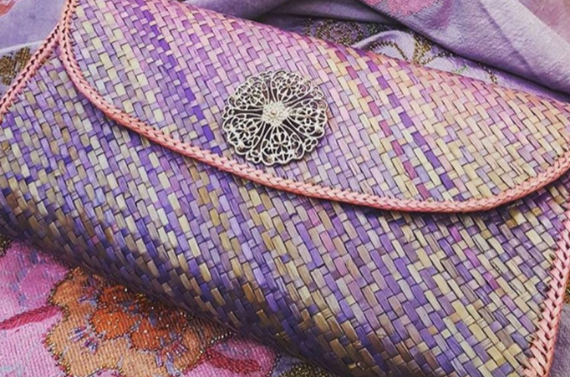 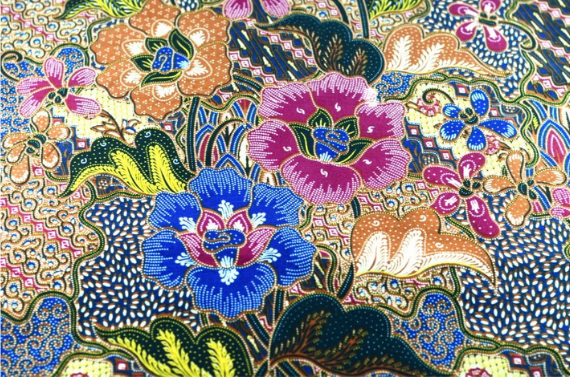 Batik is an art of dying fabric that Hindu merchants brought to Malaysia, centuries ago. In this craft, the designs are first drawn upon a cloth and then blocked off with a wax layout. Batik has now become a well-established art that is widely used on bags and pillow covers. In Malaysia, batik craftsmen are famous for their hand-drawn designs, a technique known as batik tulis. The craftsman sketches the design using a pencil, then traces the design using a traditional, elegant tool called canting. So many contemporary Malaysian fashion designers have created batik a staple of their collections, designing traditional tunics and headscarves for mainly Muslim women in Malaysia, and also outfits for customers in Europe and the USA. 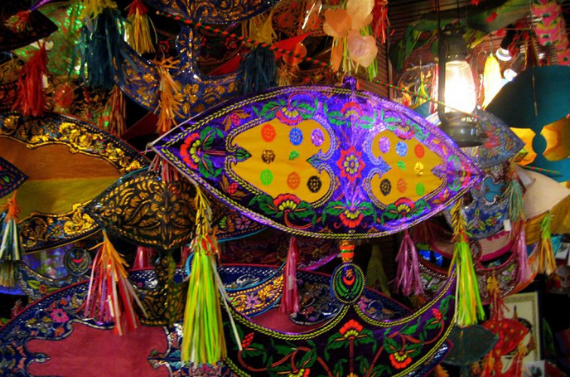 Designed in vibrant colors and styles, kites are made in intricate designs with extreme care. Floral designs are also sometimes used for its decoration as paper tassels are joined to give it a full look. The established art had been widespread since the Melakan court's imperial times. 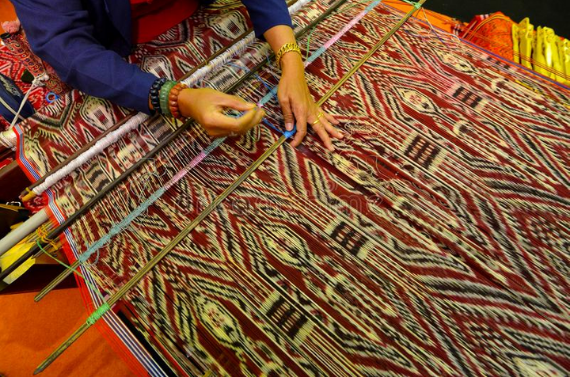 Malaysia 's natural resources provide plenty of materials, which are perfect for the various types of weaving. Like rattan tree thorny vines are best used to make eco-friendly furniture and the strong fronds of sago palm are also useful for crafting. Sago is dyed in various shades in Borneo and then woven into artistic jewelry, baskets, hats, floor mats, etc. 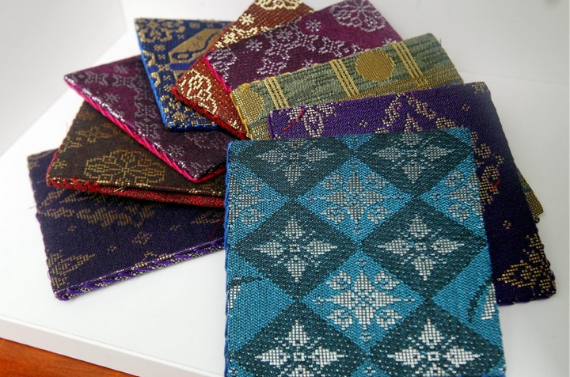 Using an intricate additional weft technique in which gold threads are woven between the background cloth 's longitudinal silk threads. This rich and luxurious fabric has in the past demonstrated the Malay elite's social status. The exclusive songket requires between one and three months to complete, while the regular songket only takes about three days. 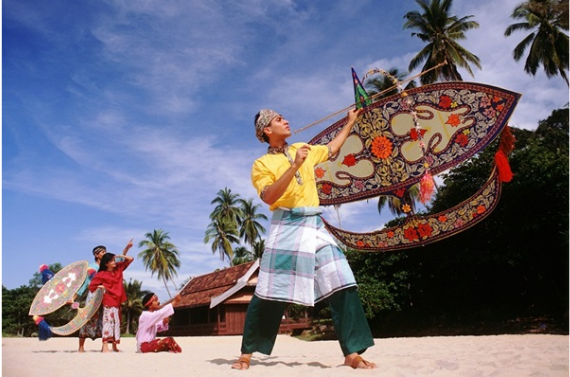 Wau or Kite in Malaya is a beautifully crafted Malaysian kite that has been flying in the past. It is called 'Wau' because the design of its wing is similar to that of an Arabic letter (pronounced as "wow"). It is a wonderful tradition inherent in people's culture, particularly in the Eastern states of the Malayan Peninsula. 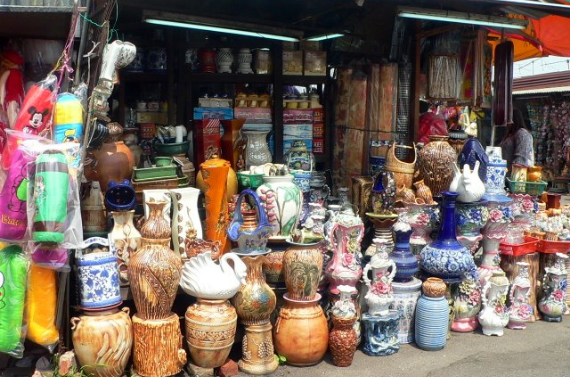 Malay pottery is much more than just household utensils. They are cultural artifacts born out of the expertise, esthetic sensitivity, and religious strength of the people who have the uncanny ability to comprehend nature in the most artistic way. Usually unglazed, Malay pottery can be divided into four different styles: Labu Sayong, The Belanga, Buyung, and Terenang.

There are several traditional arts and handicrafts in Malaysia that are gradually fading away with time. In addition to the craftsmanship, Malaysia's contemporary art scene is turning its heads and starting conversations. Viewed as innovative and important, works from the Malaysian contemporary art scene have been sold at record prices abroad, establishing groundbreaking Malaysian artists as a force to be reckoned with.